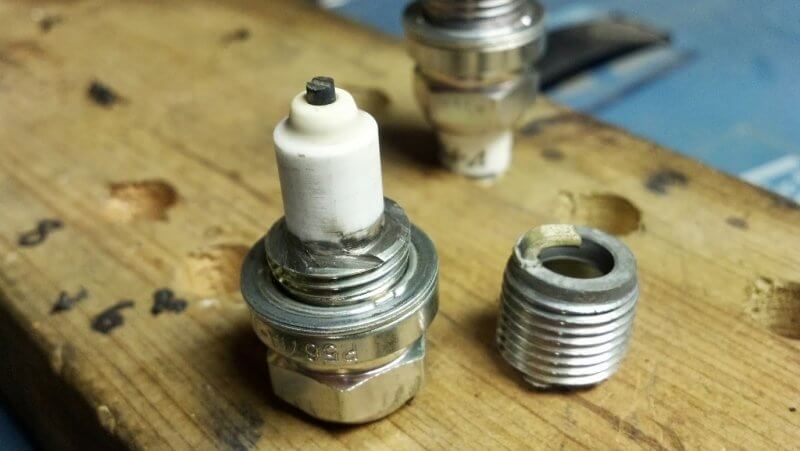 This -11 plug is very close on the tuneup but a bit lean, it measured AFR 13.5:1 on a Nitrous pass. The small amount of color was likely due to being driven to the lanes but it was towed back - no run time after the pass. Note a lack of any heat mark on the ground electrode - that's deceiving, this is a -11 NGK Plug and timing was about where the engine was happy at - adding 1/2 degree timing on this tuneup only picked up just a little bit of MPH - it's very close to being right for that engine. Based on the AFR and MPH, we're going to try adding a "little" fuel to this tune up and see if MPH picks up. 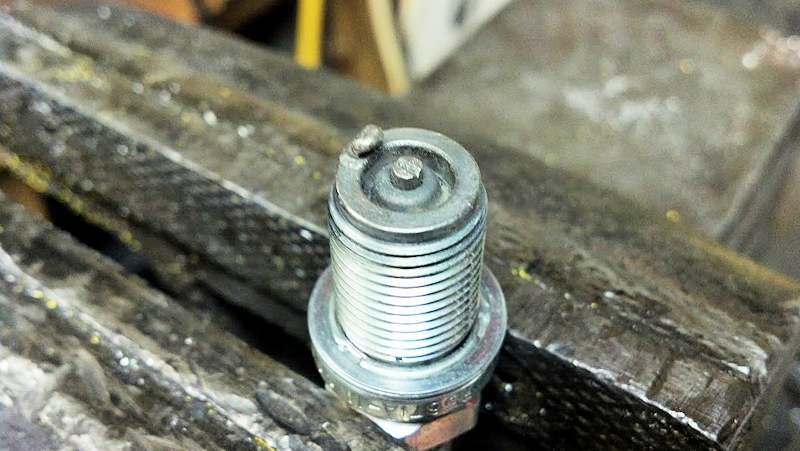 Here's an example of having way too much timing, way too much fuel for a very brief time, the last thing you want to see when you pull a plug out. The only thing that will melt a ground strap is too much HEAT, period. This plug was used in a run where timing was being ramped in way too slowly on a large shot. It was on an very short, aborted pass, hence how rich the plug looks, was driven all the way down track idling on a too rich carb with -11 plug. When you see something like this, you've either got too much timing, you didn't get the timing in quick enough, or you've lost ring seal and oil got in the chamber which will burn a lot faster than fuel. 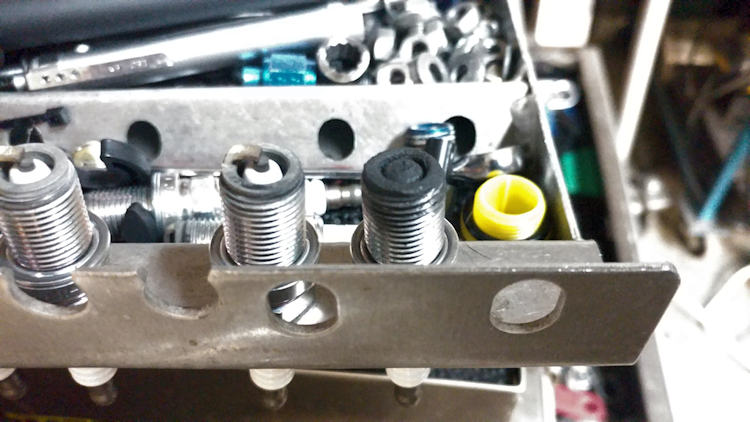 Other problems can melt one down too, this cylinder went into meltdown not due to timing, but the hole misfired multiple times, the spark plug wire on the adjacent cylinder in the firing order was off. Spark jumped over to the preceding hole in the firing order causing massive detonation and pre-ignition. The piston in that cylinder actually broke in the center "and" it melted the head all the way to the water jacket. 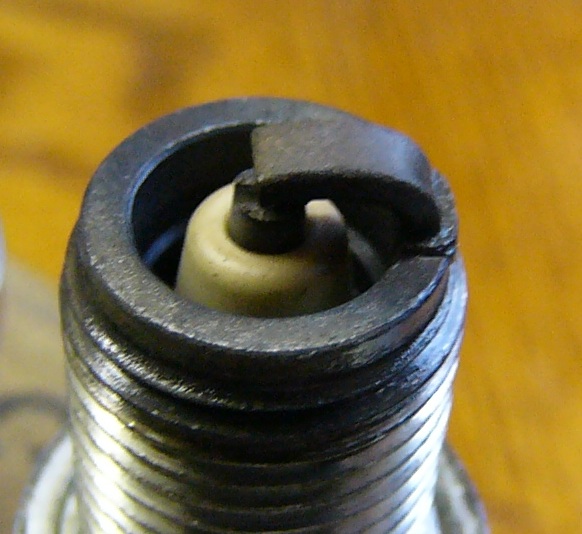 Example of oil getting into the chamber - notice the shiny glazed appearance on the porcelain, instead of a flat color it has a dull sheen to it, like semi-gloss paint. Also the plug base and threads have a shiny surface and traces of oil as well.

That's not good, it means oil's getting into the chamber and you're having a ring seal or other oil problem. This plug will soon start misfiring soon due to the glazing on the porcelain. It also looks pretty hot if you look at the ground strap it looks pitted, another sign of high heat. The engine probably has way too much timing in it. Unlike the plugs in the photos below, this plug you could not wipe the soot off the base - it's MUCH hotter.

This particular car was sucking oil into the intake after the run while the intake vacuum was high.

Point is when you see plugs like this, you had better do a compression test and see if you've hurt the rings, but it's not always a ring seal problem that is causing oil to get into the chamber. 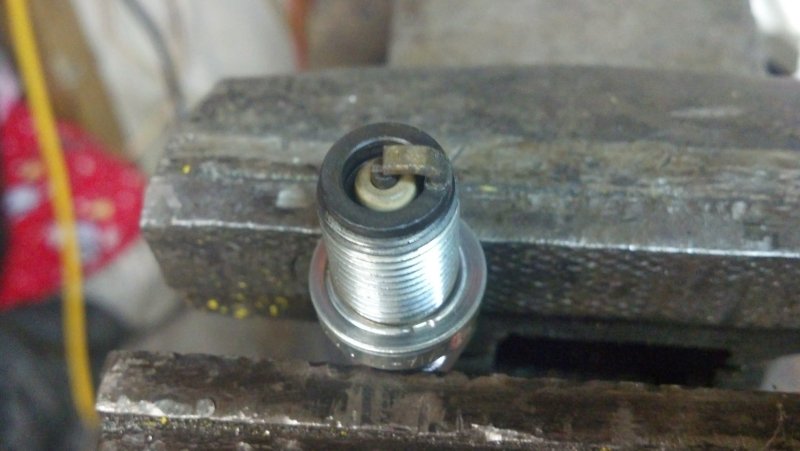 Above is another example of a glazed plug, but this time it's not due to oil. This one was sooty from engine warm up prior to a nitrous run. What happens is the soot instead of burning off glazes over and insulates the plug and it doesn't get hot enough to burn off the fuel soot deposits. Note the sheen on the porcelain in the photo, again this plug will likely start misfiring very soon. 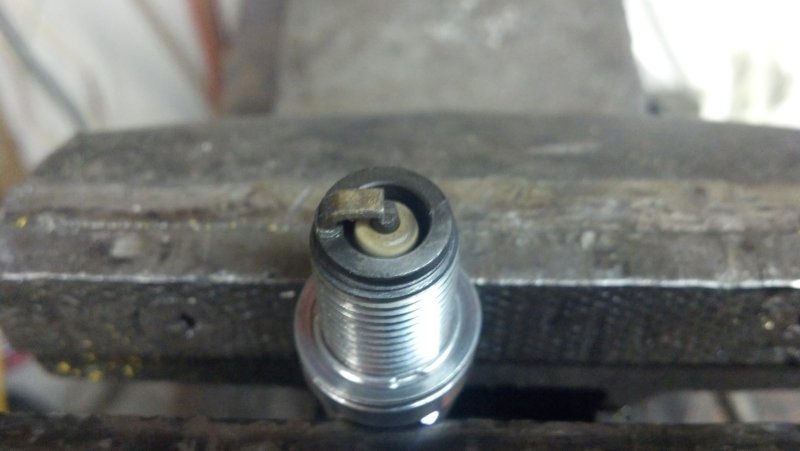 Same plug as the previous one in the vise, but this photo shows the base after wiping the glazed fuel coating off, note that the plating is still intact and has not seen any heat. That's a clear indication that the soot glazed over and insulated the plug base and electrode instead of burning the soot off.

This makes a good case to warm the engine up with hot warm up plugs in it, then pull them out and put your colder plugs in it before the pass to avoid this situation. 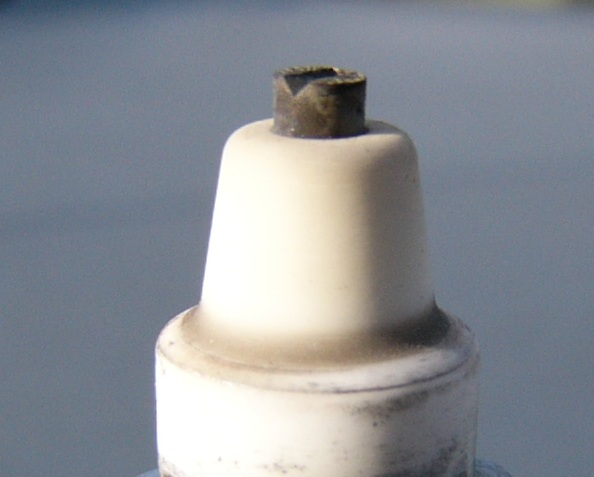 The above plug from a nice clean mid 9 second pass, this one was a little bit lean, added 1 psi fuel to it and picked up 3 mph. Note: Might need to take a bit of timing out of this tune up or use a colder plug, some deterioration on the center electrode however ground strap looked ok. It's also possible on this tune up that taking both fuel and some timing away might have been even better. 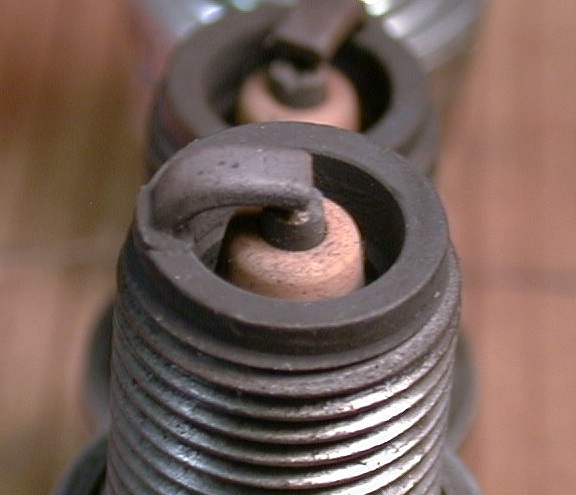 "Pepper" AKA Detonation. This was in a car that was running so rich that it blew black smoke out of it, and had way too much timing. Note the center electrode is getting ate up a little and the ground strap has the look of metal that was heated up with a torch till it was bright red. Notice the rounded edges on the electrode and the strap. The specks on the porcelain are supposed to be due to oil getting into the combustion chamber during detonation. This plug has been washed with brake cleaner, prior to that it had black soot everywhere. 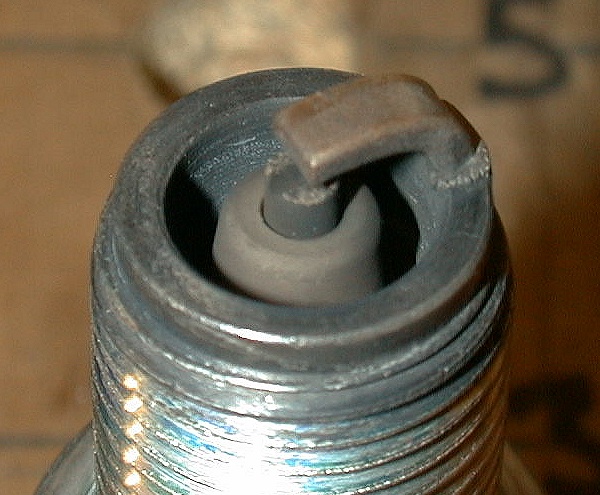 Same car, next pass with 2 lbs LESS fuel, and two degrees less timing, still too much fuel and too much timing likely. The plug is running cooler now from less timing and is now coloring the porcelain. Now it's time to start backing down the fuel a bit more. This plug has been washed with brake cleaner, prior to that it had black soot everywhere. Note: this car was driven back from the pass, hence part of why it's very rich looking. It's very difficult to get a good plug reading unless you tow back to the pits after a pass!

Same car, next pass with 1/2 lbs LESS fuel, and same timing. Still see some peppering of the plug, probably getting some detonation. Still rich and probably too much timing yet. Missing the tune up this far can hurt an engine's rings real quick. If you're seeing THAT black coloring at the base, you'll have to pull a LOT more fuel than just a 1/2 lb. This car was using the "old school" square jetting, it probably needed 10 or more less jet in the fuel side if not more to clean it up. 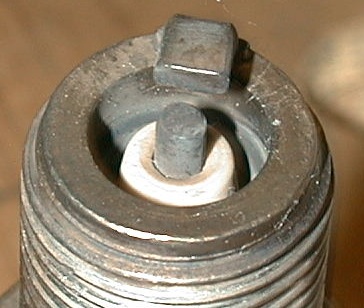 Here's an interesting one.. The above plug was in a cylinder that went "out", notice the gray down inside. The plug was working, then quit - fuel washed the soot off the rest of the plug. This is an Autolite racing plug, several plugs in this motor did this, the rest all looked gray on the base ring - perhaps on the rich side.

Ryan's Plugs AKA 66 283. Almost perfect fuel and timing, after this pull added 1-2 degrees more timing to take the heat in the ground strap just a bit more towards the corner bend and picked up 40rwhp. Watch your crankcase vacuum when you're at this point as it's real easy to go to far. When you've overtimed the engine, you'll see vacuum drop off as the rings lose their seal.

Terry Wise sent this one in, they are from his BBC, AR3933's these are very rich, he needs to take some fuel away on this tuneup.

If you have some pictures of nitrous plugs that you would like to share, please email them to admin@dragstuff.com along with some notes about what we're looking at (tune up, plug numbers, things you noticed etc.) and I'll add them to this page.